You are in:  Home » History of Quaternary Research in Cambridge » Directors

In the early 1960s Professor Harry Godwin encouraged Nick Shackleton, then an undergraduate physicist to begin investigating the sequences of oxygen isotopes found in ocean-floor sediments for his doctoral research. He arrived in the Subdepartment of Quaternary Research to work as a research assistant under Dr Eric Willis who was developing radiocarbon dating in 1961. Nick's success in the field, initiated by his interest in the pioneering results obtained by the American geologist Cesare Emiliani (in the mid-1950s), whose work he always acknowledged, led to the growth of an entire subdiscipline within Quaternary science, palaeoceanography and isotope stratigraphy.

Nick Shackleton was at the forefront of research in the field since the late 1960's, when he developed the techniques required for high-resolution isotope stratigraphy. These methods were used to obtain the first high-resolution isotope records showing the history of ice sheet fluctuations during the Quaternary. The fluctuations in size of the ice sheets were shown to have been much more numerous than had been supposed on the basis of terrestrial chronologies. The ice-sheet variations were also shown to have periodicities matching those of the principle variations in the Earth's orbital geometry, which validated the 'Milankovitch hypothesis' (Hays, Imbrie and Shackleton, 1976). The Earth's orbit was for the first time shown to be governing the timing of major climate changes.

During his early years in the Subdepartment, Nick Shackleton was housed with the radiocarbon group in Salisbury Villas (Station Road) but in 1977 the establishment of a new facility, the Godwin Laboratory on the University's New Museums' Site, brought the groups back into the city centre.

The ocean-sediment isotopic work continued with the use of various proxy climatic indicators (isotopes, lithology, faunal counts, magnetic susceptibility) to investigate the relationship between orbital forcing and climatic change. One of the most significant and fundamentally important was the development of high-resolution 'astronomically tuned' timescales for geological sequences. The new chronologies brought about re-evaluations of the supposed ages of crucial boundary events such as the Matuyama-Brunhes geomagnetic polarity reversal (Shackleton, Berger and Peltier, 1990). The astronomically tuned timescales have also clarified the behaviour in time of many palaeoceanographic processes, such as dissolution and terrigenous fluxes, and the behaviour of the climate system as a whole. In addition to extending the astronomical calibration of the geological record, Professor Shackleton has continued to investigate the processes of climate change during the Quaternary, including the investigation of high-frequency climate changes during the last glacial cycle, as part of the "Stage Three" project.

Through the success of the isotope work, Nick extended and diversified his investigations to cover an enormous range of fields for which isotope studies provided the chronology. For example, the success of the Quaternary isotope sequences lead to their extension into the Neogene and latterly the Paleogene. It also proved possible to match indications of climate and oceanographic change to calculations of the changes in the Earth's orbit over the last fifteen million years, providing an unprecedented, continuous high-resolution timescale for this interval. It has been possible to verify and extend the astronomical calibration of the Plio-Pleistocene timescale that Professor Shackleton achieved into the whole of the Late Miocene and much of the Oligocene, together with the Eocene even across the Cretaceous/Tertiary boundary.

Recent investigations by Professor Shackleton clarified the contribution of oceanic deep-water temperature changes to the marine isotope record. The result is a substantially revised chronology for ice volume changes over the last 400,000 years, since the ice volume signal can be determined from the marine isotope record once temperature effects are removed. These significant new results were achieved by retuning of the Vostok ice-core atmospheric 18O record, and comparing this with a more precisely tuned marine isotope sequence. The resulting ice volume record lags orbital eccentricity and atmospheric carbon dioxide concentrations, clarifying long-standing puzzles about the behaviour of large ice sheets, and implicating carbon dioxide concentration changes more firmly in the geological record of climate change.

Throughout his career Nick supported and advised a vast range of colleagues, friends, visitors and students at all levels. For example, the growth in dating techniques led to the arrival in 1978 in the Godwin Laboratory of Anne Wintle to undertake dating using the new technique of thermoluminescence. Anne was ultimately to stay in Cambridge for 10 years. Anne Wintle's research students included Grahame Southgate and Liping Zhou. She was replaced in 1988 by Rainer Grün, who, joined by Eddie Rhodes, not only continued Anne's work but also established an Electron Spin Resonance dating facility. He also left to become a researcher in the Australian National University.

The success of the Nick Shackleton's group was totally dependent on the irreplaceable Mike Hall who was originally appointed in 1963. Visitors, many on sabbatical leave, and many who returned regularly, were always welcomed in group. From a very early stage Nick Shackleton's research students included Chris Bates, Richard Corfield, Alex Chepstow-Lusty and Mark Maslin, among others. He also had a series of post-doctoral workers including Mark Chapman.

Professor Shackleton was elected to the Royal Society in 1985, and was knighted in 1998 in recognition of his services to Earth Sciences. His many awards and medals include the Crafoord Prize (1995), the Milankovitch Medal (1999), the Wollaston Medal (1996), the Vetlesen Prize (2004) and the Blue Planet Prize (2005). He was elected President of INQUA in 1999.

In addition to his studies of climate history and palaeoceanography, Professor Shackleton played the clarinet, extensively studied the history of the instrument and amassed an impressive collection of historical woodwind instruments. On his death the collection was donated to the University of Edinburgh's Museum of Historic Musical Instruments.


Director of the GIQR since 1995, Professor Shackleton retired on 30 September 2004. He did not leave Cambridge but continued working in the Godwin Laboratory until shortly before his death. Professor Sir Nicholas J. Shackleton - born 23.06.1937, died 24.1.2006. 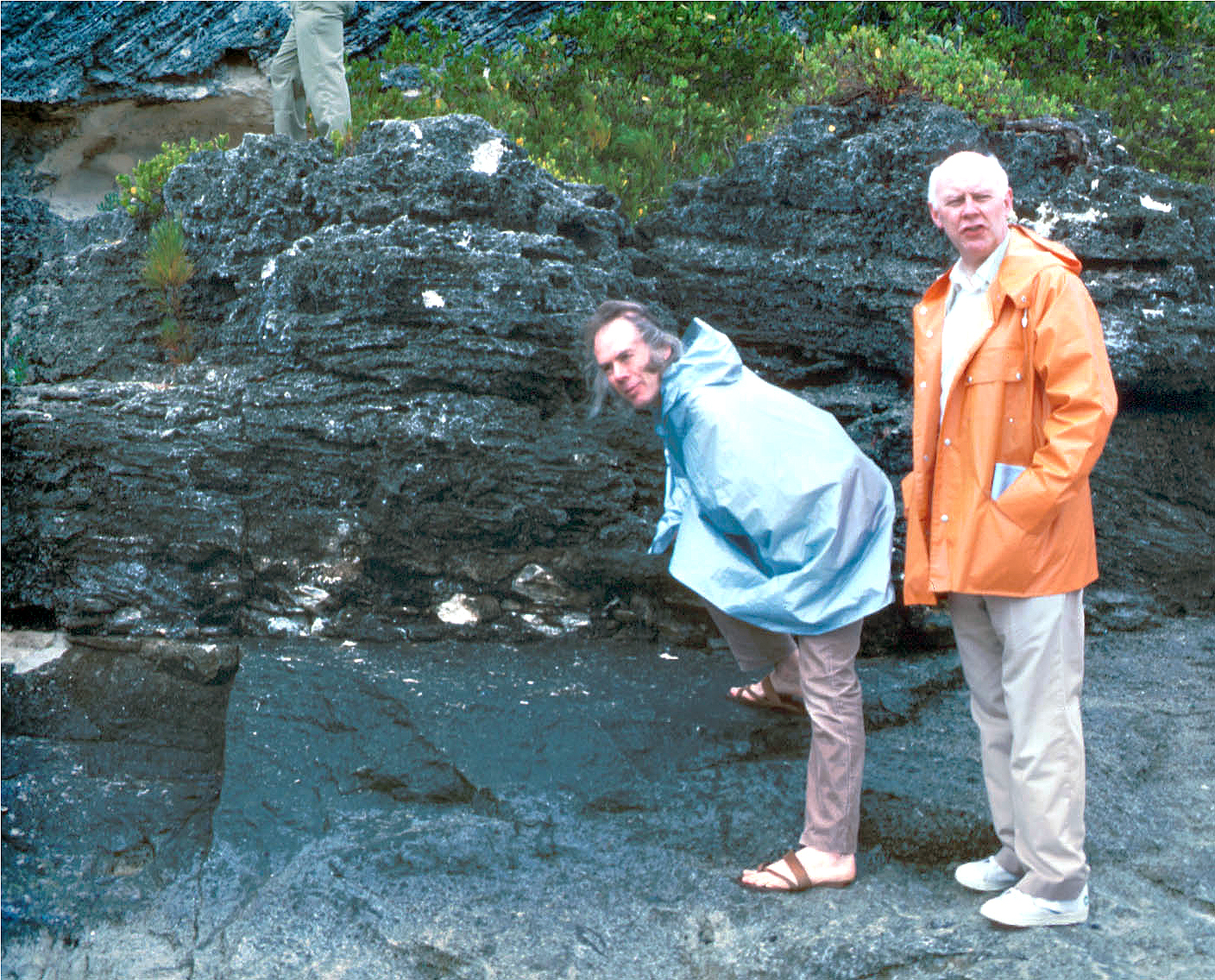 Nick Shackleton and David Bowen at the AGU Penrose Conference in Bermuda in 1987 (photograph by John Wehnmiller). Nick has his foot on the unconformity between the MIS 7 and 5e marine units. 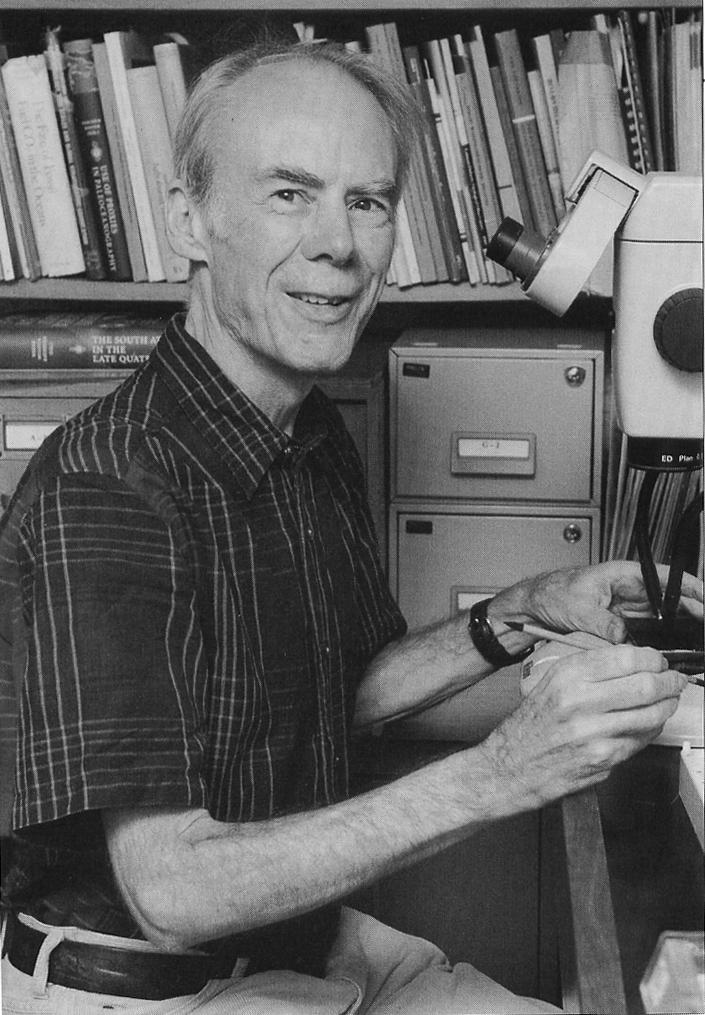 Nick Shackleton in his office in the Godwin Laboratory in autumn 2004 (photograph: University of Cambridge Newsletter December 2004)

Stamp (one of set of ten) issued by the British Royal Mail to celebrate the 350th anniversary of the Royal Society issued in February 2010 .